The research was conducted under the leadership of Prof. Erez Ben-Yosef of the Jacob M. Alkow Department of Archaeology and Ancient Near Eastern Cultures at Tel Aviv University and Prof. Lisa Tauxe, head of the Paleomagnetic Laboratory at the Scripps Institution of Oceanography, in collaboration with other researchers from the University of California at San Diego, Rome and Jordan. The article was published in the journal PNAS. 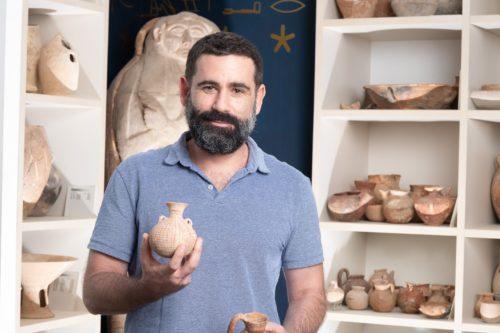 Prof. Ben-Yosef explains, “Albert Einstein characterized the planet’s magnetic field as one of the five greatest mysteries of modern physics. As of now, we know a number of basic facts about it: The magnetic field is generated by processes that take place below a depth of approximately 3,000 km beneath the surface of the planet (for the sake of comparison, the deepest human drilling has reached a depth of only 20 km); it protects the planet from the continued bombardment by cosmic radiation and thus allows life as we know it to exist; it is volatile and its strength and direction are constantly shifting, and it is connected to various phenomena in the atmosphere and the planet’s ecological system, including – possibly – having a certain impact on climate. Nevertheless, the magnetic field’s essence and origins have remained largely unresolved. In our research, we sought to open a peephole into this great riddle.”

The researchers explain that instruments for measuring the strength of the Earth’s magnetic field were first invented only approximately 200 years ago. In order to examine the history of the field during earlier periods, science is helped by archaeological and geological materials that recorded the properties of the field when they were heated to high temperatures. The magnetic information remains “frozen” (forever or until another heating event) within tiny crystals of ferromagnetic minerals, from which it can be extracted using a series of experiments in the magnetics laboratory. Basalt from volcanic eruptions or ceramics fired in a kiln are frequent materials used for these types of experiments. The great advantage in using archaeological materials as opposed to geological is the time resolution: While in geology dating is on the scale of thousands years at best, in archaeology the artifacts and the magnetic field that they have recorded can be dated at a resolution of hundreds and sometimes even tens of years (and in specific cases, such as a known destruction event, even give an exact date). The obvious disadvantage of archaeology is the young age of the relevant artifacts: Ceramics, which have been used for this purpose up until now, were only invented 8,500 years ago. 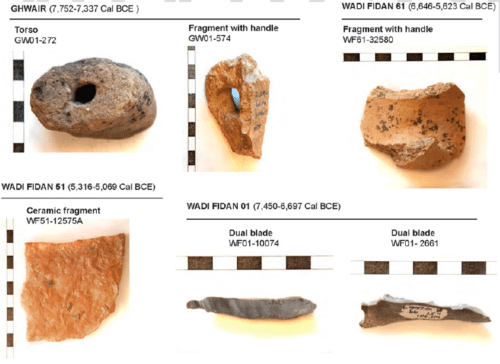 The current study is based on materials from four archaeological sites in Wadi Feinan (Jordan), which have been dated (using carbon-14) to the Neolithic period – approximately 10,000 to 8,000 years ago – some of which predate the invention of ceramics. Researchers examined the magnetic field that was recorded in 129 items found in these excavations, and this time, burnt flint tools were added to the ceramic shards.  Prof. Ben-Yosef: “This is the first time that burnt flints from prehistoric sites are being used to reconstruct the magnetic field from their time period. About a year ago, groundbreaking research at the Hebrew University was published, showing the feasibility of working with such materials, and we took that one step forward, extracting geomagnetic information from tightly dated burned flint. Working with this material extends the research possibilities tens of thousands of years back, as humans used flint tools for a very long period of time prior to the invention of ceramics. Additionally, after enough information is collected about the changes in the geomagnetic field over the course of time, we will be able to use it in order to date archaeological remains”. 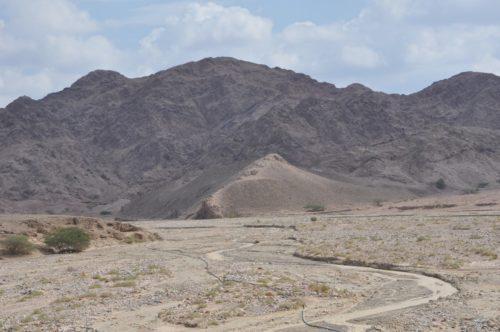 An additional and important finding of this study is the strength of the magnetic field during the time period that was examined. The archaeological artifacts demonstrated that at a certain stage during the Neolithic period, the field became very weak (among the weakest values ever recorded for the last 10,000 years), but recovered and strengthened within a relatively short amount of time. According to Prof. Tauxe, this finding is significant for us today: “In our time, since measurements began less than 200 years ago, we have seen a continuous decrease in the field’s strength. This fact gives rise to a concern that we could completely lose the magnetic field that protects us against cosmic radiation and therefore, is essential to the existence of life on Earth. The findings of our study can be reassuring: This has already happened in the past. Approximately 7,600 years ago, the strength of the magnetic field was even lower than today, but within approximately 600 years, it gained strength and again rose to high levels.”

The research was carried out with the support of the US-Israel Binational Science Foundation, which encourages academic collaborations between universities in Israel and in the US. The researchers note that in this case, the collaboration was particularly essential to the success of the study because it is based on a tight integration of methods from the fields of archaeology and geophysics, and the insights that were obtained are notably relevant to both of these disciplines.

Link to the article: